A little late but this is the most comprehensive music list I could find. Courtesy of soulwalking.uk.

Also, to my Uncle Hosea (Enox), you are very much missed!
Posted by J.Swindell at 6:27 PM 0 comments

Email ThisBlogThis!Share to TwitterShare to FacebookShare to Pinterest
Labels: RIP 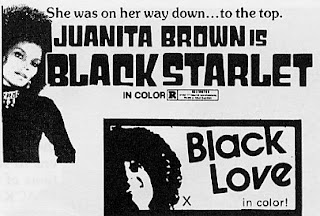 In my haste to complete minor marketing projects ASAP for different clients so I could pay bills, I thought of several things.  One was a book I'd real called Black Starlet.  I got it from Waldenbooks in the Fox Hills Mall and got deep into Donald Goines and other authors telling a Black experience that had nothing to do with slavery.  This was the mid-to-late 80s and truthfully, there was nothing that impacted my young adult life but it was damn entertaining for a period when I needed a smile.
Anyway, I gave Iceberg Slim's Pimp to a male friend because it was just too heavy at the time and around this time I discovered blaxploitation films.  I'd seen I'm Gonna Get You Sucka and Blacula several times but I wanted to hear more from the "unsung" folks.
So I rent Black Starlet from a place in Inglewood on Manchester and the Avenues (all I remember was Grady from Sanford and Son had a travel agency across the street).  It was silly but told the truth about the casting couch.  While Juanita Brown may have been entertaining back in the day, if she were to make a comeback, Viola Davis, Angela Bassett, Halle and about 200 other Black actresses wouldn't have a damn thing to worry about.  Here is a review that is a little less forgiving.
There are no YouTube clips of this movie and I'm not about to give Amazon $40 either. Yes, it is also titled Black Gauntlet but it made me remember the importance of preserving our works.
Waldenbooks is no more in L.A. and the last time I was in Fox Hills/Westfield, they were closer to having a biblioteca since the Borders Express is also history.  Then yesterday's L.A. Times article inspired me to make more positive changes in the New Year.  It is about Marcus Books in the Bay Area and the challenges it currently has with Amazon and its pricing policies.
We should not let our contribution in books, movies and other media dissolve into thin air or fight with a corporation.  This is why I've decided to add books to my posts and begin a campaign to promote literary events as well.
Comments? Suggestions?  Hit me at jwswindell@gmail.com
Posted by J.Swindell at 12:19 PM 0 comments