Who Was the White Dude in Ohio Players?

This is a question that has bothered me for all of 2014.  I saw their episode of TVOne's Unsung and I saw no White dude.  However, during my days of convalescence (which was the first half of 2014), I kept seeing him in early pics of the Ohio Players while watching the R&B Classics channel on Time Warner.

I mean, really, what's his name?  Is he still alive?  If so, does he still play music or did he see red in those contracts early on and decided to bounce?  As many times as I've heard the OP's covers on the radio (Red Hot Chili Peppers 'Love Rollercoaster' and 'Roger's 'Fire' are my favorites), I hate that OP can't live off their publishing.

Anyway, during my search for the answer to the above question, I ran across this blog that had a funny take on Ohio Players album covers, along with visuals.  Growing up, my household was more Earth,Wind & Fire or Isley Brothers and mostly female, so I was never exposed to photos that may be considered misogynist or degrading to women.  In fact, my mom recently confessed that she couldn't stand the OP.

Back to question, if anyone can ID the less-pigmented dude above, feel free to holla with the intel.
Posted by J.Swindell at 4:42 PM 0 comments

Black to the Future - Biopics 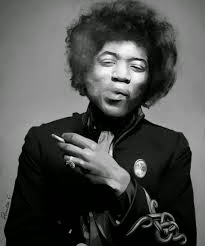 I read recently that the Jimi Hendrix movie featuring Andre (3000) Benjamin has been completed – for some time now, but a release date has not been given.  A couple of weeks before, I read that Anthony Mackie would star in a silver screen version – and it would feature original music and…the family gave their blessings to do so.  If you’re unfamiliar with the Hendrix family and why there is so much controversy, check out this article as it sheds some light as to why Black folks need to handle their business while they are alive…and sober.  Courtesy of The Wrap.

The Aaliyah/Zendaya situation is a non-factor since neither is/was a big deal.  This is not to discredit but let’s be truthful here.  And with Wendy 'How you doin'?' Williams running this, it may be laughable.  Or it just may not happen since she couldn't make her own biopic (Indiewire) was never released.

Speaking of Lifetime Movies, I wish the upcoming Whitney Houston biopic was a non-factor but chances are strong that all the social media scrapping is only giving the project the attention that the suits want.  Dammit, she could sing before she became a wife, mother and then serious junkie who left us way too soon.  So what is wrong with using an experienced director (Bill Duke, perhaps?) and a silver screen release?

Does anybody know what happened to Purple Rain’s 30th anniversary?
Posted by J.Swindell at 4:14 PM 0 comments 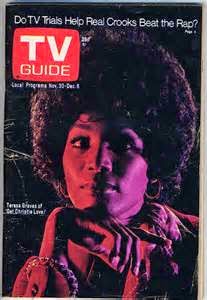 Yep..the entire series on Aug. 23-24.  I couldn't believe it myself when I saw the announcement a few days ago.  For years, I thought that Get Christie Love was a made-for-tv movie based on blaxploitation films of the time.  Kind of a lightweight Cleopatra Jones or Foxy Brown except she worked for what looked like LAPD.

Anyway, about 10 years ago I bought a GCL dvd at the drug store and saw a 1.5 hour movie that was entertaining.  I'd been meaning to ask my mother, who went to school with the late Teresa Graves (Washington High in L.A., Class of '65) but when the subject came up, Moms would get a little weepy.

I've got posts, old school videos to share (including a rare gem if you liked KDAY back in the day when it was on the AM dial) and more coming in the next few days.  In the meantime, I've got my popcorn and other snacks ready!
Posted by J.Swindell at 12:39 PM 0 comments

A great and rare life, missed by many.
Posted by J.Swindell at 6:53 PM 0 comments

Sounds nasty, huh?  Or at least extra freaky.  Maybe my temporary laziness will help to save a relationship or two as this could be a possibility as something different to do.  This was my skate jam back in the day but I loved the B-side, Oh, Sylvie.  Not Silvia or Silvana or Savannah.  Anyway, no dice! I'm getting tired but I promise I will dig further in the crates next week along with new posts.
Posted by J.Swindell at 7:33 PM 0 comments

A Day Late and a $ Short

Besides Mama and Disappearing Acts, this is one of Terry McMillan's best works.  I remember reading this book in its entirety at a bookstore a few years ago and hoping that a movie adaptation was around the corner.

Truthfully, I don't remember the entire story but if you come from a dysfunctional family *raises hand* or love to watch movies about them, I say get your treats by Saturday afternoon so you can veg out the right way.

Anyone who is a fan of Terry McMillan knows that TV movie adaptations leave something to be desired.  I remember really looking forward to Disappearing Acts on HBO and find that Wesley Snipes is the lead male character, who is not only supposed to be really tall but buff (was Idris Elba not available?)

Wasn't really in love with Taye Diggs being in the Stella movie either.  Not that he's not attractive, I just don't see any woman with her own thing going on getting involved with him.
Posted by J.Swindell at 10:39 AM 0 comments

Date with the Rain is one of those rare grooves I discovered when Garth Trinidad's Chocolate City was the business.  I think of it every time it rains here so obviously, it's been on my mind often, especially as I recover from therapy.

Sometimes I reminisce on how this and other underground jams would play on my little Aiwa stereo while enjoying a little green and a good drink.
Posted by J.Swindell at 5:35 AM 0 comments

Email ThisBlogThis!Share to TwitterShare to FacebookShare to Pinterest
Labels: More about me, music, olskoolsounds, RIP, something different, underrated, veteran, video

Black to the Future: ‘Frankie and Alice’ FINALLY Gets Major Release Date


Chances are strong that if you’ve got a “DVD man”, you’ve  already seen this or at least heard about it.  Not judging you but let's show a little love on April 4.Halle Berry stars in a story about a woman dealing with multiple personality disorder in the 1970s, and based on a true account.  Click here for more details.

Now before you start, watch the trailer below to remember how we first fell in major like with Ms. Berry.
Posted by J.Swindell at 5:24 PM 0 comments

This was one of my skating rink jams back in the day.  Doesn't seem like 30+ years but that's just one of those facts of life.  Anyway, there isn't a whole lot to be found on this group but I'm grateful to Soul Walking for their 411.

I didn't make the video as there seems to be no official video for this classic jam.  Enjoy!
Posted by J.Swindell at 10:06 PM 0 comments

Email ThisBlogThis!Share to TwitterShare to FacebookShare to Pinterest
Labels: music, olskoolsounds, something different, underrated, unsung, video, who that?

A few weeks ago, illness forced me to leave my hole in the wall and live in a house where every tv has Time Warner cable, which does not carry several stations that specialize in old movies.  Now, I get free rides to the hospital, a view of the mountains...in fact, just about everything is free since I don't write as often.  But this does not mean that my mind has stopped working...not counting the occasional brain fart.
) I didn't see '12 Years...' though I like Chewitel and Brad Pitt mostly because I didn't want to.  I'm glad a deep chocolate sis is getting love but why cant she be loved as a lawyer, damn good mother or something else?  This is not to say that hoes, slaves, crackheads and maids are not worthy but Clair Huxtable was along time ago!

People that trip me out the most are the ones with REALLY ethnic names (as in starts with De or La or ends in esha/isha/ishia, etta or other combination) but run real fast to the other side.

Anyway, besides being not funny, I don't know much about this chick except she has a White husband.  I tried when she did Talk Soup some yrs. ago.

So in getting to my point, there's been nothing on TV to watch while I recover.  Oh yeah...reruns of I Love Lucy, Dragnet, shows from the 70s and the occasional hour-long program dedicated to bacon and other delectable treats I can't eat.