One good thing about last week’s discussion was that people were reminded that BET no longer shows old Black movies. Though the demographic has shifted, somebody under the age of 25 with a trade school education might appreciate the moral lesson that Cabin in the Sky delivers. For all the years I’ve been around, I don’t think they have shown any movie that starred Roscoe Lee Browne.

Anyway, Bounce TV alone is worth investing in and installing a digital antenna. I got an old-school (remember the rabbit ears?) one for less than $12 at Best Buy. It worked better than the fancy things that were $25 and up. In most cities, This TV is another digital channel that shows pre-blaxploitation era movies and others that aren’t too violent or “pulp”.

If you have cable, TV One and Aspire are good sources but Turner Classic Movies is turning out some gems. For a minute there, they seemed to be stuck on 1972’s Trouble Man with Robert Hooks but over the holidays, I got a real treat.

Before the recession hit my humble yet dysfunctional home, I would peruse the Amazon lists for the most rare blaxploitation movies. Some were disappointments but others, like Black Girl are worth the search. Abar, the First Black Superman was a nice surprise although the acting was mostly subpar and there were no known names attached.
The story is about a doctor who is making a serum that gives one super strength. While his intentions may have been good, he moves his family to a White (but looks like Inglewood/Baldwin Hills or Culver City adjacent) neighborhood. Neighbors are less than friendly but somehow when things get rough, a group of Black bikers comes to the rescue…not once, but twice in 20 minutes. The good ol’ doc suddenly gets the bright idea to recruit the leader, Abar, to moonlight as his personal bodyguard.

Although the constant presence of bikers wears down some of the White folks from protesting in front of the Black family’s yard, a few are relentless but get their just reward. Plus there’s a couple of other surprises I won’t let out. More people need to look to the late Jamaa Fanaka for making quality films on a budget, especially in the age of #oscarsowhite.
Posted by J.Swindell at 8:00 AM 0 comments


Still finding my groove here so I thought I'd hit you twice.

Before he was known to Gen X'ers as the lovable Chef on South Park, Mr. Hayes did win an Oscar for the film Shaft. The elders tell me that he and his gold chain tees were quite the phenomenon back in the day. Outside of this and the disco hit Don't Let Go, he made quite an impact on R&B music.

What can I say about MJ that already hasn't been said in the past 50 years. So much talent. So misunderstood. We miss you Mike!
Posted by J.Swindell at 8:00 AM 0 comments

Again with that Statue

Last week, those skinny b’s got on my damn nerves. One is mad because her husband didn’t get nominated and the other is forgetting where is bread is buttered. So once again, what about financing our own thing?
For those who want to get something going, don’t go after broke bishes like me and say we can’t unite. My heart is in the right place but my few coins are to ensure that I have a place to stay when I’m 70. Not to buy expensive shoes for hoes. Not to get a car with a name I can’t spell. And especially not to buy hard drugs or other stupid mess. 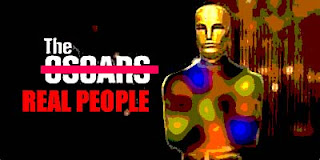 And take a better look. Asians aren’t getting noms either and if you want to find a Latino that’s down with the cause, let them in too! When it comes to creating a community with strength in numbers, you can’t have too many resources. And we can portray characters that are not dirty, stereotypical or oppressed. YAY! Hell, even go after some of those dealers-turned-moguls. They may not be holding the long bread like Buffett but this will give their asses an opportunity to be Robin Hood of sorts. Something for all with money looking to find wealth will think about…no?

For those who say they have to go through the man, I say have a talk with Spike Lee and other about distribution and word of mouth because I’m seeing a lot of Black/AA films get attention (and accolades) without traditional promotion.
Finally, let’s take a look at past Oscar winners. While Whoopi is still in the game and hasn’t altered her face to please anyone, others have not been so lucky. Halle, Jamie Foxx and Denzel work but don’t seem to have the same audience post-win. Mo-Nique, Cuba Gooding, Lou Gossett and others have been demoted to mostly straight-to-DVD or TV projects. Some, like Irene Cara and 3Six Mafia, have fallen completely off the radar.
Posted by J.Swindell at 8:30 AM 0 comments

My apologies for not posting this sooner.  Rest in paradise.
Posted by J.Swindell at 5:50 PM 0 comments

That Little Gold Statue ...All That Glitters 2016

So it's nice that Mrs. Will Smith has something to say but does it really need to be said?
How about saying something after other things have been accomplished?
Such as no more police brutality, no more babydaddys, no more "uncles" and no more of our people using reality TV as a come-up.

What about giving the average person some love because they did something good without being famous?
What about showing off your kitty kat or eggplant to that special someone you plan to spend your life with instead of the world?

So in other words, it's one night of alleged celebration.  What about the other 364 days when people don't have a platform that makes worldwide news based on celebrity?  What makes people special?  Because they put out a movie or because they made a profound difference in someone's life?

I say eff a celebrity and let's get back to celebrating real people!
Posted by J.Swindell at 5:44 PM 0 comments

Something You May Have Forgotten About David Bowie

Firstly, rest in paradise and thank you for giving us the gift of not only music but bringing gender bending to the masses and making it acceptable in pop culture.

Back in 1996, Bowie portrayed eccentric pop artist in Basquiat.  The biopic starred Jeffrey Wright and details his struggle with becoming a recognizable artist and substance addiction. My favorite Bowie song tied with "Fashion".
Posted by J.Swindell at 1:14 PM 0 comments